Two summit finishes, four sprint stages and a time trial in the city of Ajman await the riders at the 4th edition of the UAE Tour, which begins on February 20th.

The official route, jerseys and sponsors for the fourth edition of the UAE Tour have been announced. This year’s edition includes four stages for sprinters, two mountain stages suitable for peloton climbers and a 9km high-speed individual time trial. The only WorldTour race in the Middle East, the UAE Tour will open the 2022 UCI WorldTour calendar from February 20-26, 2022 with 1081km of racing spread over seven stages. The race, which runs through varied landscapes, will feature a vertical drop of 3500m, almost entirely concentrated in stages 4 and 7.

A stage that takes place entirely in the desert. The start and finish follow approximately 45 km of straight roads. Once in Liwa, the route enters an area of ​​dunes that accounts for most of the elevation gain of the stage. A series of bumps are traversed twice to take riders to the Moreeb Dune. After passing Liwa for the second time, the route follows the same path back to Madinat Zayed. A perfectly straight urban route for the last few kilometers, following wide and straight avenues without obstacles.

A stage around the city of Abu Dhabi. It starts from Hudayriat Island and takes place in its first part in Abu Dhabi to reach Sheikh Zayed Bridge (arch. Zaha Hadyd) and then Khalifa City. After midway at the Al Wathba Camel Track, the course passes through Al Falah to converge at Yas Marina and head towards Saadiyat Island and the Corniche before reaching Abu Dhabi Breakwater where a peloton sprint is expected. The last 5 kilometers remain on a wide road with sharp turns leading to the finish. 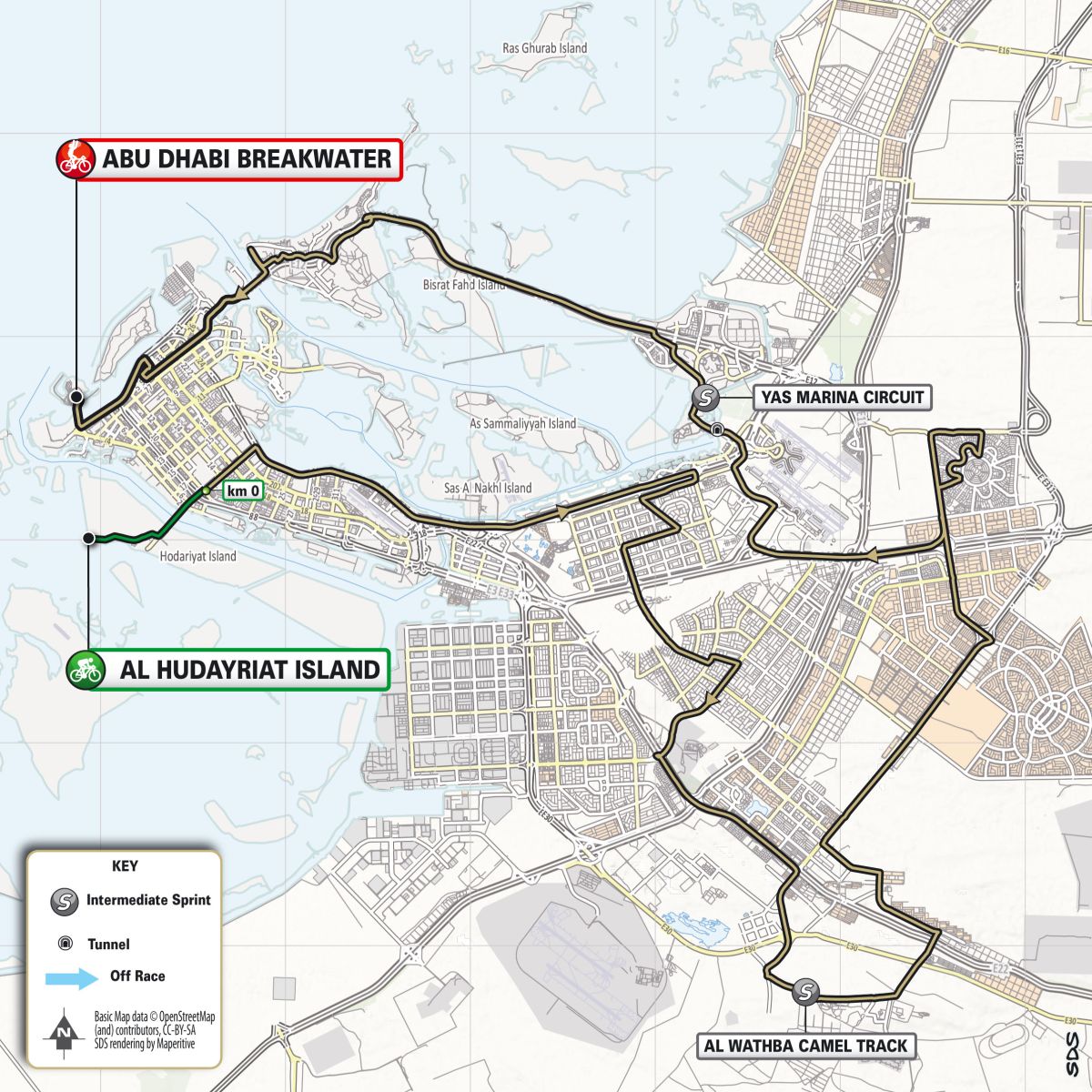 An Individual Time Trial that takes place entirely in Ajman and features a very fast course with only a U-turn about half way. The road is perfectly flat and wide with large curve radii. 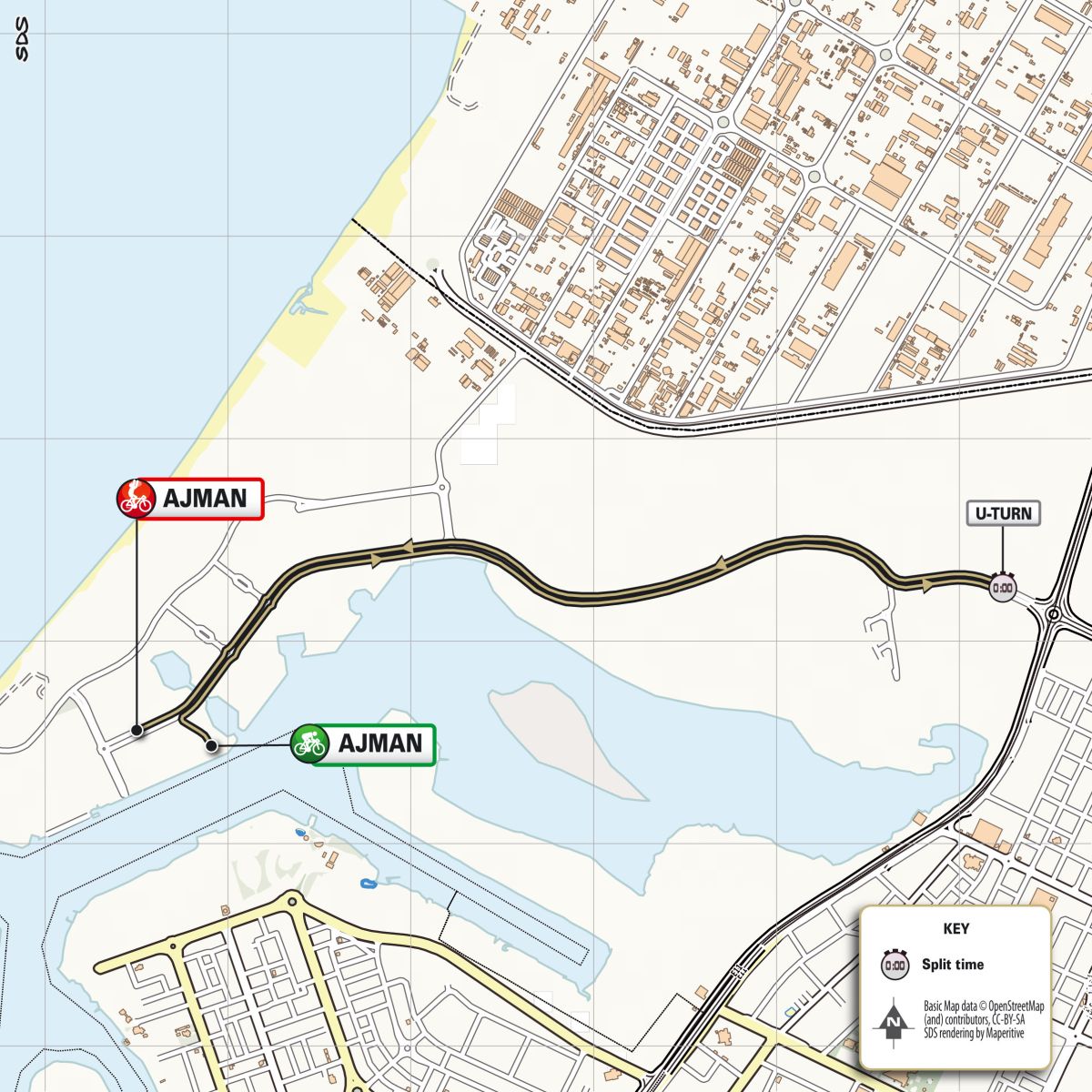 This is the first of two most likely crucial mountain stages of the Tour of the United Arab Emirates. It is divided into two different parts: the first is a hilly approach to the last mountain through the desert and the second is the last twenty kilometers of continuous ascent to the finish. Starting in Fujairah, it crosses the desert areas on the edge of the Hajar mountains towards Ras al-Khaimah, whose capital is not crossed by the race heading straight for Jebel Jais mountain. The last climb of the stage is about 20 km long at an almost constant speed of 5%, with slightly steeper gradients of about 7% in the last 2 km. The last climb winds through hairpin bends on a very wide road. The gradients remain mainly around 4/5% in the first part of the climb and 5/7% in the second part with a peak of 9% 2 km before the finish. 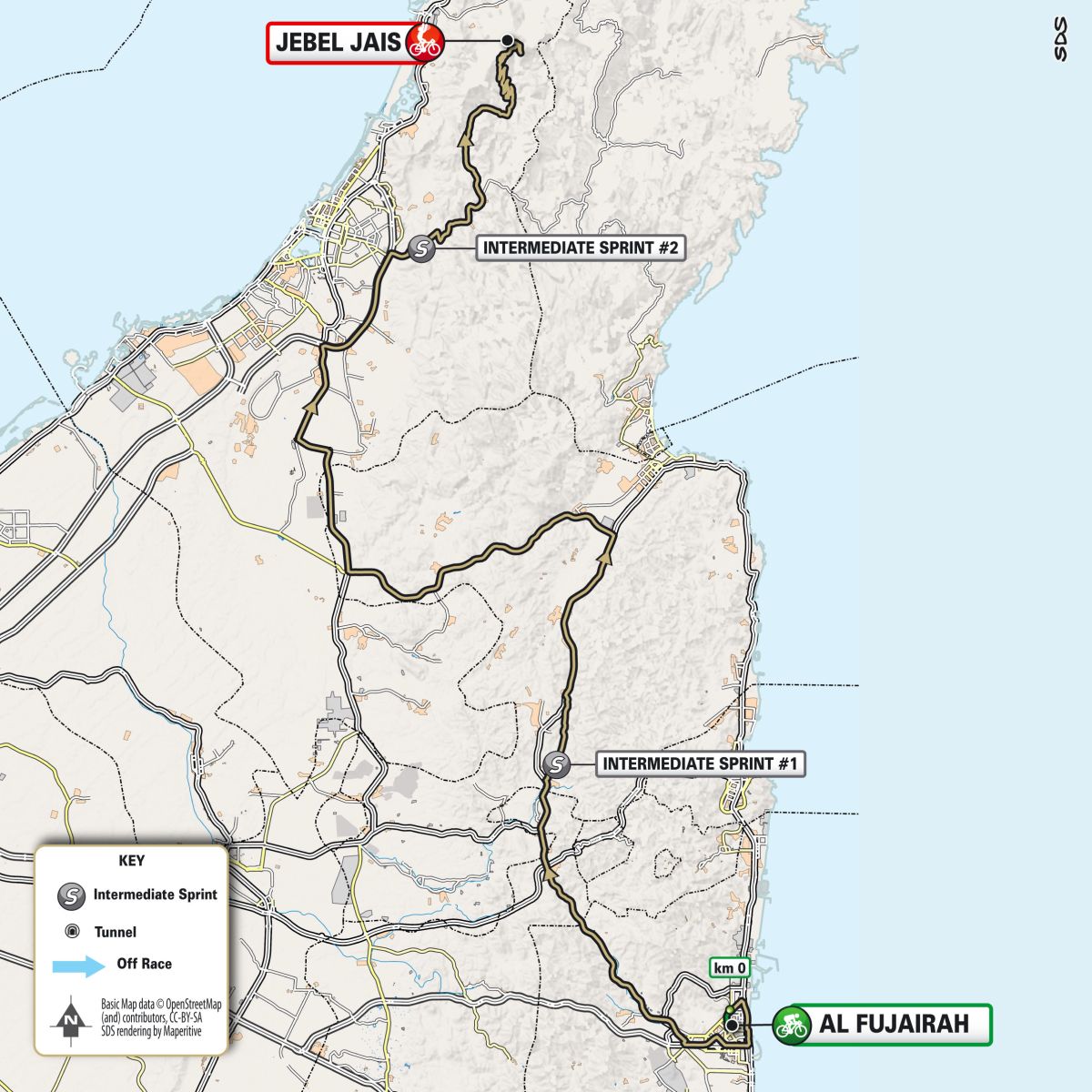 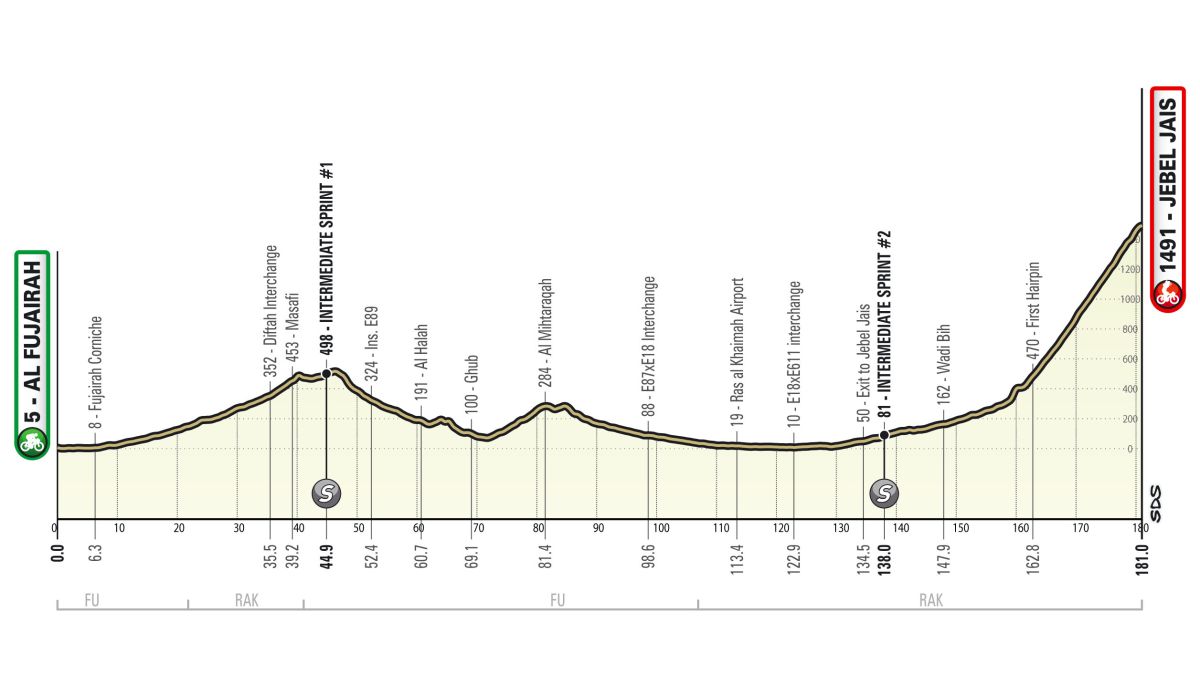 The stage begins in Ras-al-Khaimah to cross the desert after the start. At the foot of Jebel Jais it then heads towards Umm al Quwain and again crosses the desert north to almost reach Ras al Khaimah before heading towards Marjan Island for the final spurt. The entire course is on wide, well-paved, and mostly straight roads through the desert, where wind and sometimes sand can affect the peloton. 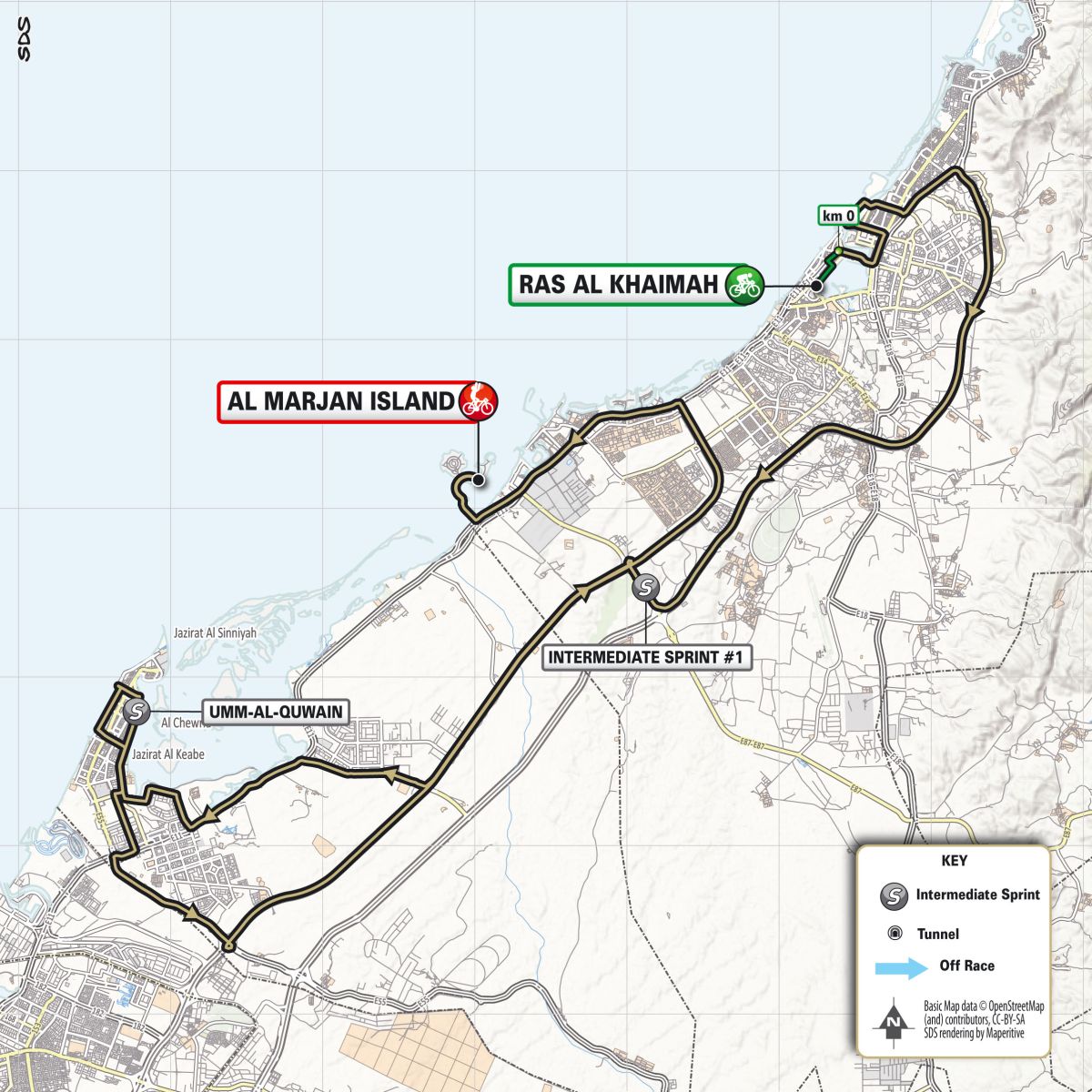 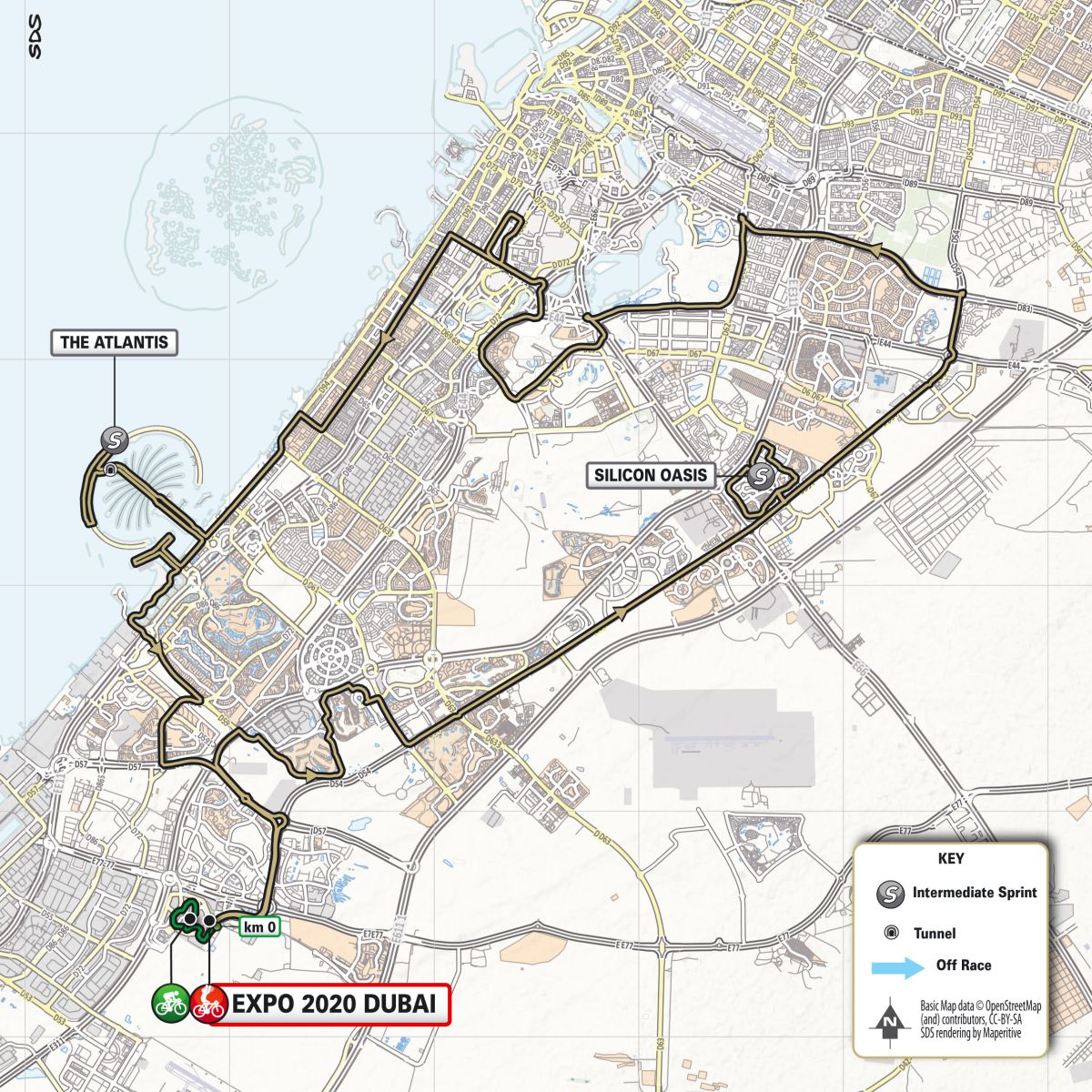 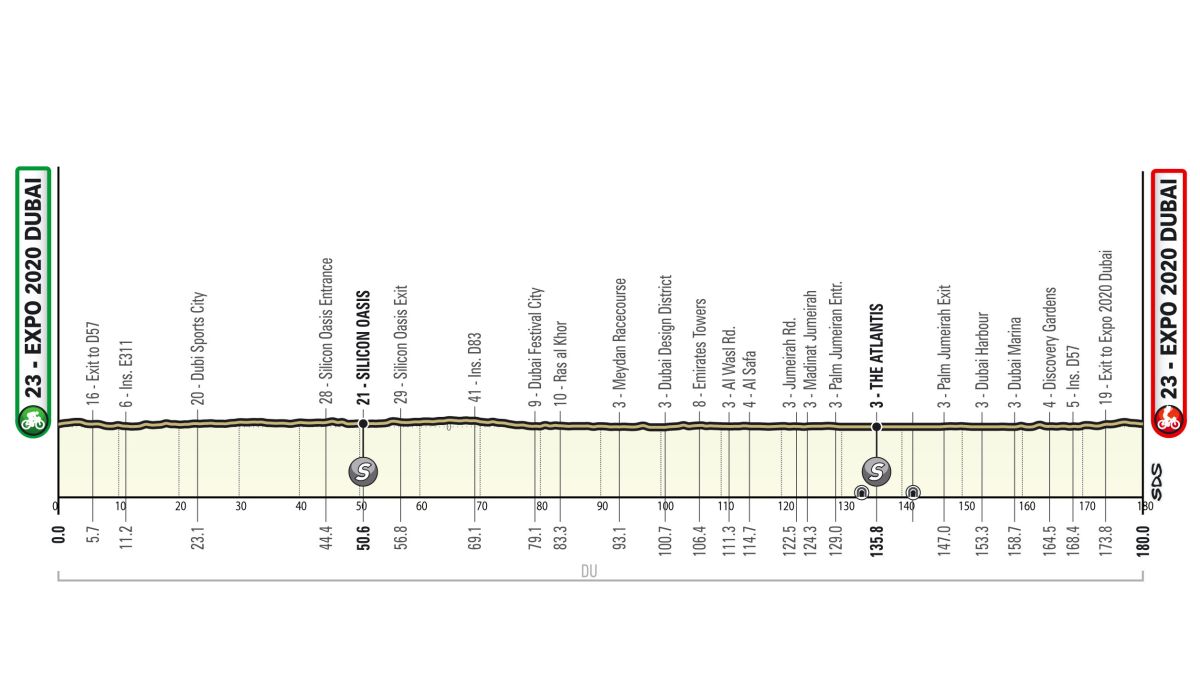 This is the classic mountain stage of the Tour of the United Arab Emirates. The first part of the stage follows the usual route around Al Ain, passing many well-known attractions (Al Ain Zoo, Al Qattara, Al Hili, Al Ain Oasis) before returning to Green Mubazzarah after a long loop in the desert of the last 10th km climb of Jebel Hafeet is the final ‘judge’ of the race. The last climb winds in wide hairpin bends on a 3-lane road. The gradient is about 8-9% with a peak of 11% 3 km before the finish. There is a very short descent on the last kilometers before the last ramp. 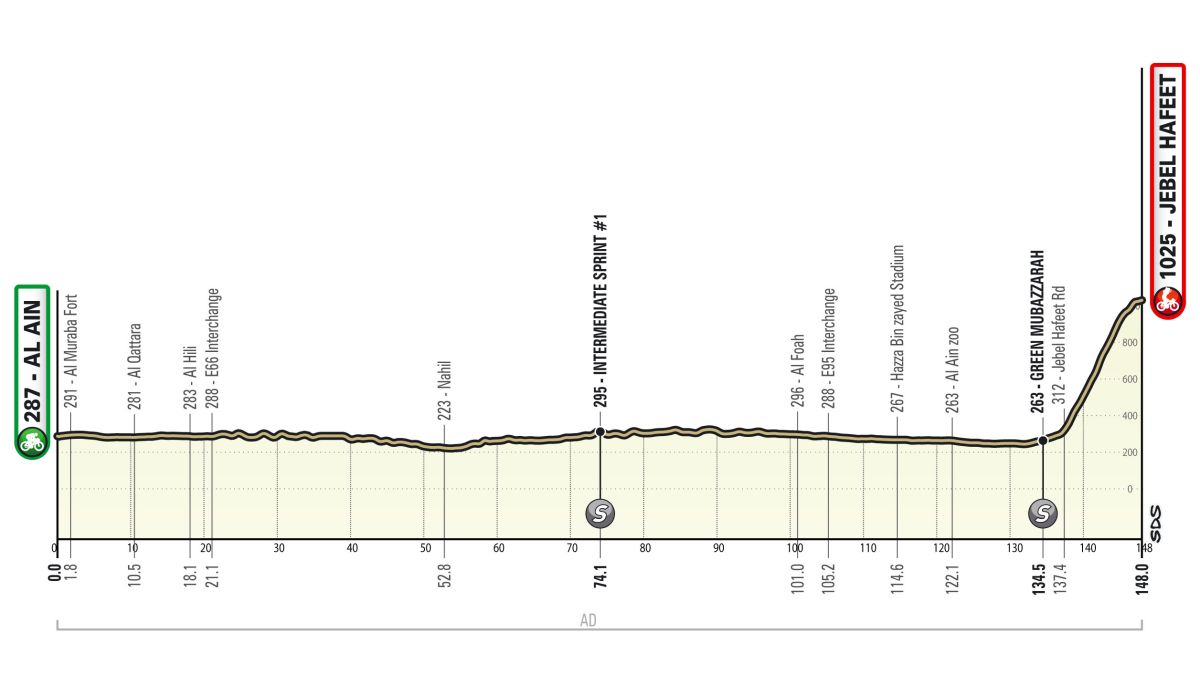